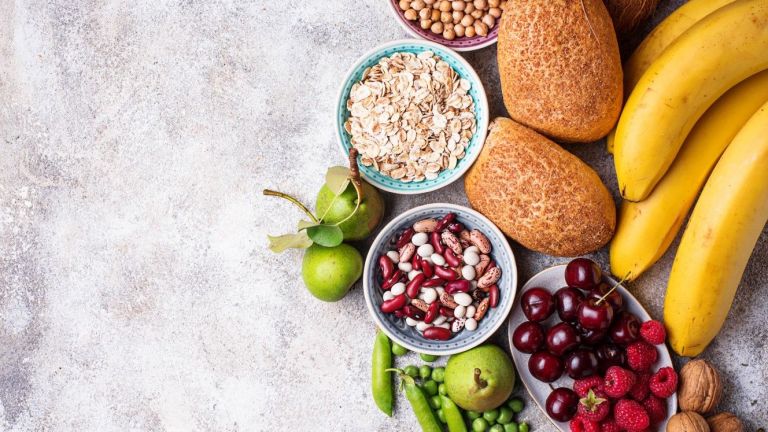 Is Dietary Fibre the New Protein?

Is Dietary Fibre the New Protein?

You’d have to be living on a different planet to have missed the exploding popularity of low-carb ketogenic diets the last couple of years. The numerous health benefits of this way of eating are largely the product of a reduced carbohydrate intake resulting in lower blood glucose and insulin levels. However, people who adopt this eating strategy also often increase their protein intake, and this aspect may be responsible for some of the positive effects patients report, possibly including less hunger and increased satiety. And while low-carb diets place restrictions on the total amount of carbohydrate that can be consumed—including vegetables and fruit—they still allow for generous fibre intake. Nevertheless, overall, dietary fibre appears to have been left behind by the carb-versus-fat wars, relegated to a forgotten element hiding in the shadows. What if people focused on their fibre intake as much as they pay attention to protein, fat, and carbs?

The Institute of Medicine’s Food and Nutrition Board recommends that adults consume 21–38 grams of dietary fibre per day, depending on age and gender. However, survey data indicates that less than 5 percent of the US population achieves this, suggesting that we have a “fibre intake gap.” The gap is even larger when compared to estimates of fibre intake in the Paleolithic ancestral diet—potentially as high as 70 grams per day, depending on geography and season.

It’s not difficult to reach the recommended level of dietary fibre intake when consuming a variety of vegetables, fruits, nuts, seeds, and added fibres if appropriate. In fact, it’s not difficult to exceed the recommended level. Well-known Paleo diet researcher Loren Cordain, Ph.D., showed this in a paper in which he detailed the nutritional characteristics of a contemporary diet based on estimated Paleo nutrient intakes. The diet was substantially lower in total carbohydrate than the modern American diet (23 percent of energy, compared to mean intake in the US of over 46 percent), yet provided much more dietary fibre: 42.5 grams.

It might not be necessary to get quite that much fibre on a daily basis, but getting closer to the recommended intake may have a beneficial impact on numerous chronic, noncommunicable diseases that currently plague the industrialized world. It’s possible that foods high in fibre—particularly foods that contain fibre naturally, such as broccoli, almonds, cabbage, etc.—may displace foods that are higher in refined carbs and lower in fibre, and the lower glycemic impact of these foods could be expected to beneficially impact cardiometabolic health. Where patients should be more cautious is in evaluating nutrition facts labels on products where fibre is added as a marketing tactic to make high-sugar, low-nutrient items appear healthier and more wholesome. These added fibres may not have the same physiological effects as those of fibre intrinsic to whole foods, and patients with certain gastrointestinal disorders may experience an exacerbation of their symptoms from consuming these additives.

There certainly seem to be some benefits to some of these fibres, however. In particular, fermentable fibres, such as those contained in resistant starch (RS), appear to have numerous desirable effects. A meta-analysis published last month determined that supplementation with RS results in lower fasting blood glucose, insulin, and HOMA-IR in patients with obesity and type-2 diabetes. A systematic review published earlier this year looking at the effects of consuming green banana products (sources of RS) found that these are effective for ameliorating persistent diarrhea in children, decreasing hunger and increasing satiety in healthy adults, and for improving markers of insulin resistance in subjects with type 2 diabetes. RS may also be a useful adjunct to treatment for chronic kidney disease, as was shown earlier this year.

With all this positive talk about dietary fibre, we would be remiss if we didn’t acknowledge that some individuals may not be suitable candidates for increased fibre intake. For example, some patients with chronic constipation may actually fare better with less fibre in their diet. A fascinating study published a few years ago showed that adults with idiopathic constipation had complete resolution of symptoms (constipation, anal bleeding, abdominal pain, strain during bowel movements) after following a zero-fibre diet for six months. (A previous article took a closer look at the role of fibre in exacerbating constipation.) Indeed, a paper published in the American Journal of Gastroenterology noted, “Some patients may be helped by a fibre-rich diet but many patients with more severe constipation get worse symptoms when increasing dietary fibre intake.” So when assessing a patient’s diet for fibre, or lack thereof, remember that while fibre has several properties worth celebrating, for a subset of individuals, more fibre isn’t always better.