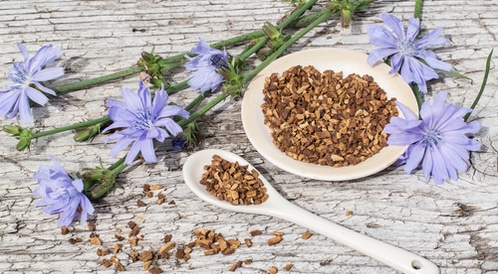 People who cut back on their carbohydrate intake or focusing on healthier eating, in general, have likely noticed a relatively new ingredient in food products tailored for Paleo, ketogenic, low-carb, and simply “real food” consumers: inulin. Not be confused with the hormone insulin, inulin has several properties that make it attractive for inclusion in bars, shakes, baked goods, and other foods. Let’s take a closer look at this interesting compound.

Inulin occurs naturally in a variety of plants, such as bananas and plantains, onions, garlic, and jicama, but the majority of inulin used in the food industry comes from chicory root, with lesser amounts coming from Jerusalem artichoke. The word inulin is derived from Elecampane, a plant in the same botanical family as sunflowers and daisies, and whose taxonomical name is Inula helenium. Inulin is a carbohydrate. More specifically, it’s a polysaccharide consisting of fructose polymers with a terminal glucose moiety. Humans lack the digestive enzymes to hydrolyze the bonds between the fructose molecules (β(2,1) bonds), so inulin reaches the colon intact, where it serves as a prebiotic fibre for intestinal bacteria.

Inulin belongs to the fibre category known as fructans, a general term for fructose polysaccharides that also include fructooligosaccharides (FOS), which have chain lengths that are relatively short. Some individuals self-identified as having non-celiac gluten sensitivity may actually be reacting to the fructans in wheat rather than to the gluten. In a placebo-controlled double-blind crossover challenge of subjects following self-instituted gluten-free diets but who were confirmed as not having celiac disease, scores on the Gastrointestinal Symptom Rating Scale (GSRS) for irritable bowel syndrome and bloating were significantly higher for participants consuming fructan than for participants consuming gluten. Wheat and onions are the largest sources of fructans in the modern American diet, accounting for approximately 95% of the total. (Wheat contributes 70%, onions 25%.) Individuals who have trialed gluten-free diets for suspected gluten sensitivity but who have not had remission of symptoms may wish to consider a low- or no-fructan diet, particularly if they regularly consume onions, garlic, or bananas, which would be permissible on a gluten-free diet and could be the culprits behind a lack of symptom improvement.

The health benefits of inulin

Colonic fermentation of inulin and other prebiotic fibres results in the production of short-chain fatty acids (e.g., acetate, butyrate, propionate), which may have various beneficial health properties. In a rodent study of metabolic syndrome characteristics induced by a high-fat diet, supplementation with inulin was shown to substantially reduce body fat gain and insulin resistance. The reduction in body fat gain may have been due to the induction of beige/browning markers in white adipose tissue, as suggested by an increase in body temperature. (The browning of white adipose may upregulate thermogenesis, induce other beneficial metabolic effects, and have a role in the treatment of obesity.) Inulin also reduced hepatic fatty acid uptake, lowered hepatic triglycerides and dramatically improved insulin sensitivity, as measured by HOMA-IR. (Rat chow augmented with SCFAs directly—acetate, specifically—led to similar results and in some categories even more substantial improvements, so it may be that SCFA production as a byproduct of inulin fermentation is responsible for most of the effects.) This was a rat study, but the findings are certainly interesting, particularly because, as mentioned earlier, inulin is included in food products marketed toward individuals looking to improve their metabolic health, often with a goal of lowering their blood sugar, improving insulin sensitivity, and losing body fat.

Research in humans supports the efficacy of inulin and oligofructose for improving glycemic control and insulin resistance in subjects with type 2 diabetes, as shown by a 2019 systematic review and meta-analysis.

Colonic fermentation of inulin is species-specific; certain organisms have a greater affinity for it than others. Bifidobacteria are preferentially stimulated to grow, which causes changes in the composition of the gut microbiota by increasing the proliferation of bacteria believed to be health-promoting and reducing the growth of those believed to be potentially pathogenic.

The downside to intestinal fermentation of inulin is that it typically results in gas, bloating and abdominal pain, especially when consumed in large quantities. This may be compounded when inulin is included in food products that also contain sugar alcohols, which may independently cause gas, bloating, or loose stools. These drawbacks may be worth it, however, for consumers looking for higher-fibre, lower-carb products, which can make it easier and more convenient to adhere to a reduced-carbohydrate diet for the long term.

Owing to its effects in the colon, inulin may be additionally beneficial for individuals who experience constipation. Enough evidence indicates that chicory inulin increases bowel movement frequency that the European Food Safety Authority formally acknowledged a cause and effect relationship between the consumption of chicory inulin and maintenance of bowel regularity. Their 2015 scientific opinion paper stated, “The following wording reflects the scientific evidence: ‘Chicory inulin contributes to maintenance of normal defecation by increasing stool frequency.’” In order to get this effect, they recommend consumption of 12 grams of “native chicory inulin” daily. That’s not beyond reach since chicory root fibre is available for sale and can be added to various foods or beverages.

Including inulin in these types of products helps improve the nutritional profile because by providing fibre, it can reduce the “net carb” count: net carbs (also called “impact carbs” or “effective carbs”) are the grams of total carbohydrate in a food minus the grams from fibre and sugar alcohols. Fiber has a minimal impact on blood glucose for most people, but fermentable fibers are not calorie-free. Individuals vary in their body’s capacity to derive energy from fermentable fibres, but the estimated range is between 1.5 and 2.5 kcal/g. Less than regular fructose or glucose (4 kcal/g), but not negligible, especially for those who may be consuming large amounts of these fibres, and when combined with sugar alcohols that have a notable glycemic and insulinogenic impact (such as maltitol and xylitol). For inulin, specifically, the caloric value has been estimated at 25-35% that of fully digested and absorbed fructose, for a yield of 1.5 kcal/g.