The Supportive Role of Okra for GI Health 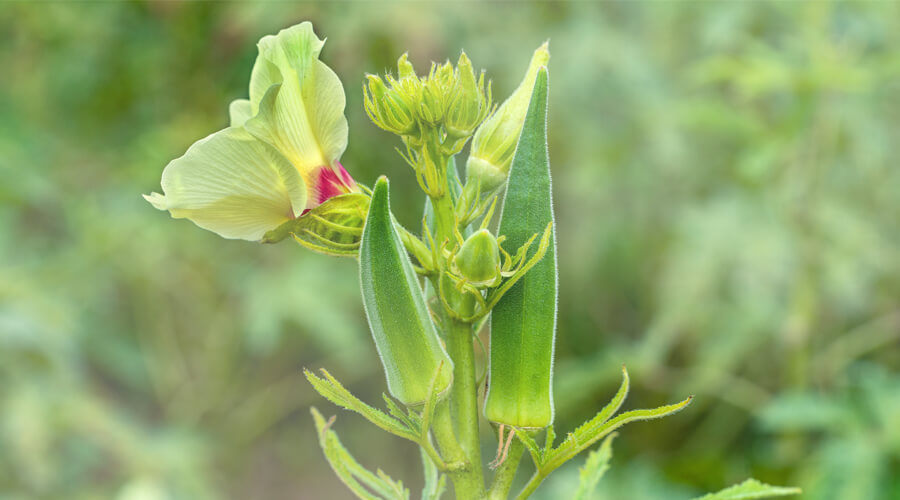 Okra (Abelmoschus esculentus L.) is a botanical used as a food and to support specific aspects of human health. Historical origins of the plant trace back to Ethiopia and other parts of North Africa. It is grown in subtropical regions world. India currently produces the most okra worldwide. Traditional uses include the support of the gastrointestinal (GI) and urinary systems.

The fruit of the okra plant has three main parts: the pod, the seed, and the mucilage. Each piece of the okra plant contains different bioactive molecules. Okra seeds contain essential fatty acids, other proteins, and oils, such as linoleic acid, a polyunsaturated fatty acid (PUFA). The okra fruit contains dietary fibre, vitamins, and minerals, including potassium, calcium, phosphorus, beta-carotene, riboflavin, and other B vitamins. Okra pods contain flavonoids that have been shown to support the body’s response to oxidative stress.

The importance of Okra mucilage

The mucilaginous components of okra have been shown in research to help support the lining of the digestive tract. They have also been shown to contribute to the healing process of peptic ulcers. The mucilage is also alkaline and may help to neutralize acids.

The mucilage in okra has been shown in studies to potentially support glucose metabolism, theoretically due to its higher viscosity. It also contains polysaccharides that may help support healthy lipid metabolism and cellular health.

Some properties in mucilage have also been studied for their potential to help prevent the adherence of harmful bacteria, such as Helicobacter pylori (H. pylori), to the stomach lining. Other studies have indicated that okra pod extracts exhibited antibacterial activity against several harmful bacteria species, including Staphylococcus aureus, Mycobacterium sp., Escherichia coli, and Pseudomonas aeruginosa.

A laboratory study analyzed the potential impact of immature okra in the presence of H. pylori. In a dose-dependent manner, okra fruit extract inhibited the binding of membrane proteins, such as SabA, HpA, and BabA. Some compounds from okra fruit extracts were also shown to bind to different strains of H. pylori. Overall, the study concluded that high quantities of okra fruit extract were shown to exert inhibitory effects on the adhesion of H. pylori in a laboratory setting. The authors also noted that more studies in the laboratory and clinical settings need to be conducted before additional conclusions can be determined.

Okra is a health-supportive plant with a full geographic history. First, from North Africa, okra became an important food in parts of the Caribbean, North and South America, and parts of Asia. Okra also possesses bioactive constituents that may support GI health and the body’s response to oxidative stress and harmful bacteria.