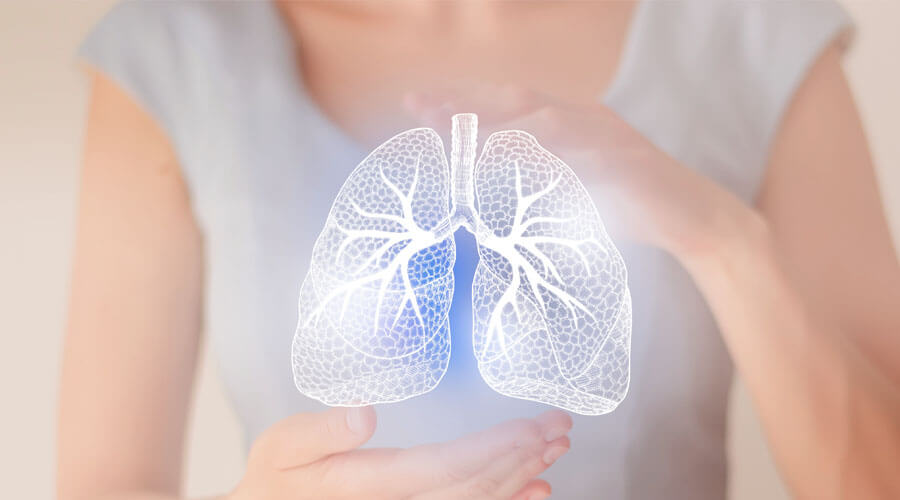 Chronic inflammation, small airway fibrosis, and lung parenchyma destruction are characteristics of COPD, which is the world’s third leading cause of death.

Asthma is another chronic inflammatory disease that has affected approximately 262 million people in 2019 and is characterized by swelling and narrowing of the airways that can lead to breathing difficulties, wheezing, and shortness of breath.

Research suggests that targeting oxidative stress and restoring normal redox balance in the lungs may be an effective strategy for treating the underlying pathophysiological mechanisms (i.e., oxidative stress) involved in chronic respiratory and airway diseases.

Diet and nutrition are also important tools that can be used to help regulate the immune response in cases of pulmonary dysfunction, as they are modifiable contributors to lung health.

According to Gozzi-Silva and colleagues, a variety of nutrients, including fat-soluble vitamins, some minerals, fatty acids, and polyphenolic compounds (e.g., flavonoids) can promote lung health status and reduce the risk of pulmonary disease and infections due to their antioxidant and anti-inflammatory properties.

The Gut-Immune-Lung Axis in Pulmonary Homeostasis

The gut-immune-lung axis is also an important player in pulmonary homeostasis. Microbial fermentation of fibre and thus, short-chain fatty acid (SCFA) metabolite production in the gut has been shown to have a beneficial effect against allergic lung inflammation. SCFAs affect dendritic cell maturation in the bone marrow, reducing their ability to provoke T helper (Th)2 cell responses in the lung tissue.

The role of Vitamin A in the Immune response

Clinical studies have shown that serum RA concentrations are significantly lower in asthmatic patients compared to healthy controls, and RA administration increased lung Treg cells and attenuated the increase of Th2 pro-inflammatory cytokines and pulmonary inflammation in an experimental animal model of asthma.

Vitamin C is well-known for its role as an antioxidant in the immune system. Vitamin C supplementation has been shown to reduce severity and mortality in 197 elderly patients with pneumonia. Studies show a correlation between vitamin D deficiency and respiratory distress syndrome (RDS) in infants, and those with higher 25(OH)D levels can be preventative of RDS development, highlighting the role of vitamin D in lung cell maturation. Vitamin D also demonstrated an anti-inflammatory effect in patients with COPD.

Vitamin E demonstrated an ability to help support individuals with asthma and hay fever symptoms due to its anti-inflammatory action. In combination with selenium, vitamin E improved pulmonary inflammation in mice by reducing serum Th2 cytokines and constriction and mucus secretion in the lungs.

Copper, Selenium, and Zinc are directly involved with Immune Responses

A review published in Nutrients demonstrates that copper, selenium, and zinc are directly involved with immune responses and have a high impact on asthma.

Increased copper-to-zinc and copper-to-selenium ratios can indicate inflammation and be a marker of immune status. Copper levels are shown to be elevated in individuals with asthma. The main carrier for copper, ceruloplasmin, acts as a free radical scavenger and is shown to be elevated during oxidative stress as a response to the inflammatory burden observed in asthma patients.

Copper is also required for lysyl oxidase (LOX) activity, which is responsible for collagen and elastin cross-linking that correlates with copper concentration for proper respiratory function. The copper and zinc-containing enzyme, superoxide dismutase is located in ciliated epithelial cells and is decreased in asthma due to increased inflammation.

Selenium also influences the Th1/Th2 balance by promoting T cell differentiation toward Th1. Selenium deficiency is associated with a higher asthma risk; asthmatic patients have lower selenium and GPx levels, most likely caused by decreased selenium absorption from increased inflammation. Compared to healthy controls, blood selenium levels were twofold lower in asthmatic patients and there was a significant inverse association of selenium levels with inhaler usage, suggesting that supplementation may help modulate redox balance in the lung.

Zinc is well-known for its various roles in regulating immune function and supplementation can support a healthy immune response.*

Zinc deficiency has been shown to impair cellular and humoral immune function; as a consequence, Th2 cell dominance favours allergic responses demonstrating the role zinc plays in proper T-cell differentiation. Low serum zinc levels were found in patients with COPD and were more pronounced in severe COPD patients when compared to milder cases, as well as children with respiratory tract infections. Balanced iron levels are also crucial for proper lung function and survival.

Flavonoids, such as anthocyanins and flavonols, are bioactive compounds found in plants that possess immunomodulatory properties and are associated with regulating key signalling pathways like nuclear-related factor 2 and nuclear factor-kappa B. Evidence suggests that flavonoids have the ability to reduce inflammatory mediators, fibrotic factors, and edema that may suppress airway hyperresponsiveness in pulmonary diseases.

This research highlights the need for patients to consume a variety of whole foods that are rich in vitamins, minerals, fibre, and phytonutrients to support immune health, as it relates to pulmonary function. More human clinical research is needed to further elucidate the potential role that these micronutrients and compounds play in pulmonary dysfunction and its comorbidities.