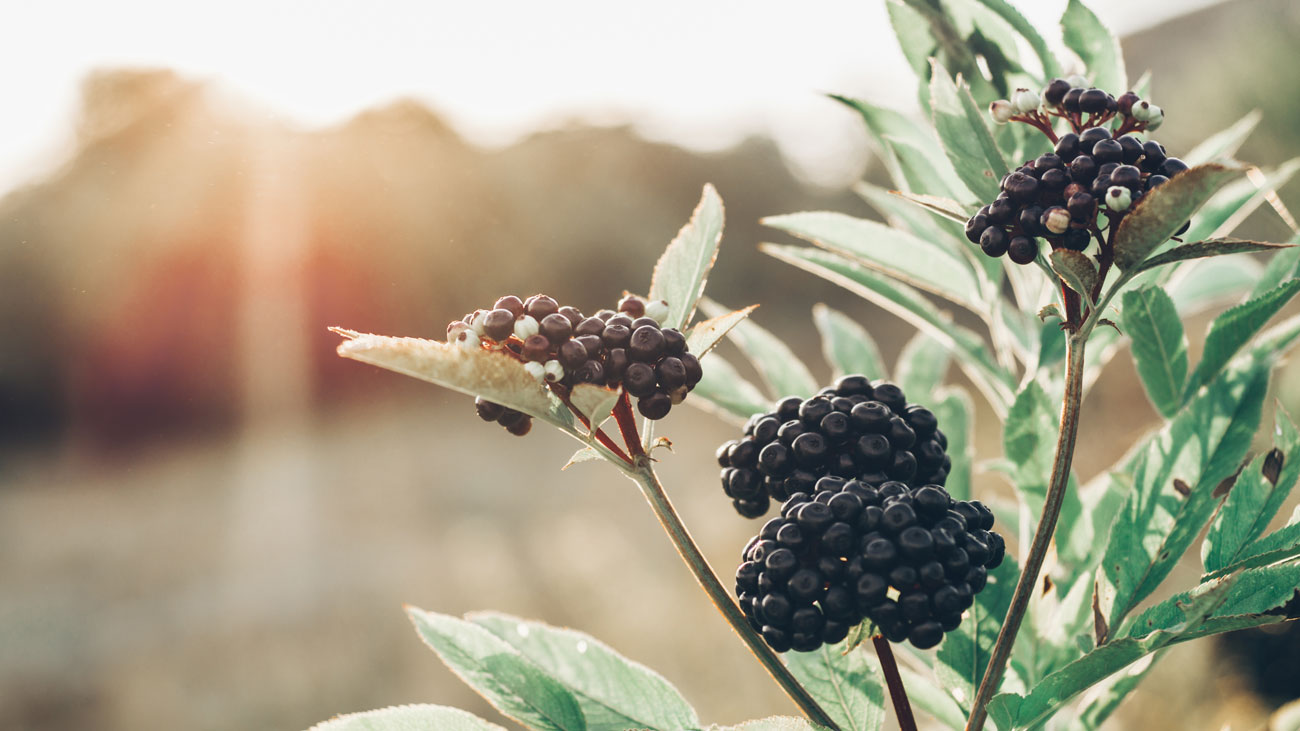 It’s that time of the year again that many of us dread – influenza (or flu) season. There are many people who attempt to prevent catching the flu virus by getting their yearly flu shot. Unfortunately, there are no guarantees, as each year’s vaccine must be well-matched to the circulating influenza virus. According to the Centers for Disease Control and Prevention (CDC), overall vaccine effectiveness (in the US) from 2009 to 2019 has been between 19% and 60%.

Oral administration of cooked elderberries has been shown to provide effective antiviral benefits and has posed no safety risk, nor imparted negative side effects. The fruit of the elder, known as Sambucus nigra L., was a popular ancient remedy for a variety of ailments and also commonly consumed in jam or wine. Today, it is one of the most widely used medicinal plants worldwide, particularly for its antiviral properties and ability to stimulate the immune system. Once fully ripened, the dark violet-black drupes are edible and subsequently may be concentrated into an extract or juice to reduce common cold duration, influenza, as well as ameliorate flu-like symptoms.

A research study from the University of Sydney found that elderberry compounds possess multiple modes of therapeutic action against the flu. It has the ability to directly inhibit viral entry and replication in human cells helping bolster a person’s immune response to fight off the virus. One of the researchers stated that the elderberry extract administered in the study was able to prevent early stages of infection and had an even stronger effect at discouraging propagation in the post-infection phase. Elderberries’ ability to block at various stages in the viral cycle leads to a much greater likelihood of inhibiting infection.

The fruit possesses compounds that are able to directly target and block the viral glycoproteins that are responsible for attachment and entry into the host’s cells. The same study found that the elderberry imparts indirect antiviral effects by upregulating expression of pro-inflammatory cytokines IL-6, IL-8, and TNF in order “to coordinate a more efficient response against the invading pathogen”. A recent meta-analysis in Complementary Therapies in Medicine found that elderberry supplementation significantly reduced upper respiratory symptoms due to viral infections and purport that elder fruit is a safer alternative to prescription drugs.

Elder fruit’s antiviral characteristics can be attributed to its high anthocyanidin content, a phenolic phytochemical flavonoid. Other than being responsible for giving the fruit its deep purple-black colour, anthocyanidins are potent antioxidants that can protect cells against free radical damage and oxidative stress. They also play a role in inflammatory cytokine signalling, a key factor in immune system activation and its ability to protect against viral infection.

Influenza prevention and treatment through safe and alternative approaches

Incorporating elderberry as part of safe and alternative approaches to the prevention and treatment of flu viruses can support better patient outcomes during the colder months of the year.