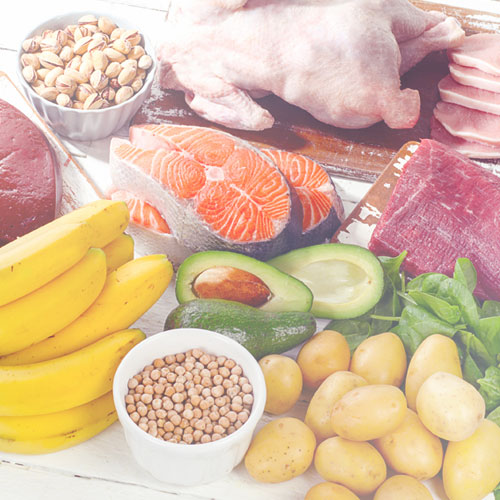 Vitamin B6, or pyridoxine, is a water-soluble molecule that metabolizes into cofactors for more than 100 enzymes in the human body. Vitamin B6 transforms in the body into an active coenzyme pyridoxal 5-phosphate, known commonly as either PLP or P5P.

Functions and deficiency symptoms of B6

PLP is involved in gluconeogenesis, glycogenolysis, lipid metabolism, and the synthesis of amino acids, carbohydrates, proteins, and neurotransmitters. Deficiencies in vitamin B6 have been shown to present clinically as microcytic anemia, glossitis, peripheral neuropathy, electroencephalographic abnormalities, confusion, and depression.

Stress disorders and B6 intake

Recent research has studied the association between mood disorders such as depression and anxiety, stress, and intake of vitamin B6.

A recent cross-sectional, population-based survey aggregated data from 447 female adults regarding dietary intake of vitamins B6, B9, and B12.

Dietary intake of vitamin B6 was shown to be associated with lower incidences of depression.

Another recent population-based survey included data from over seven thousand adults regarding B vitamin intake and psychological stress. The study used the Depression, Anxiety, and Stress Scale 21 (DASS-21) and a validated food questionnaire. In an aggregation of the data from the entire population, vitamin B6 was shown to have a protective effect on stress measures.

A third study focused on individuals over the age of sixty found that low status of vitamin B6 was associated with an increased risk of anxiety and was significantly associated with depression.

B6 and Magnesium uptake

In addition to its role in neurotransmitter synthesis, vitamin B6 may facilitate the cellular uptake of magnesium. A controlled randomized eight-week-long clinical trial assessed the difference between supplementation with magnesium alone or with a combination of magnesium and vitamin B6 on stress levels in individuals who experience moderate to extremely severe stress. The daily dose was approximately 300 mg of elemental magnesium, and 30 mg of vitamin B6 and stress levels were measured using the DASS-42 at baseline, week four, and week eight. Both treatment arms experienced improved DASS scores after eight weeks, with the combination magnesium-B6 having experienced more significant improvements. In subgroup analysis, those who experienced severe or extremely severe stress levels at baseline were shown to have statistically significant improvements at week 8 in the combination arm. In the overall population, a reduction of stress was observed in both treatment arms of approximately 30% at week 4 and 40% at week 8.

Vitamin B6 is an essential molecule with many roles within the human body, including the support of neurotransmitter synthesis. Adequate dietary intake of vitamin B6 and supplementation may support mood and healthy stress response.