Clarifying the Role of Elderberry for Immune Support 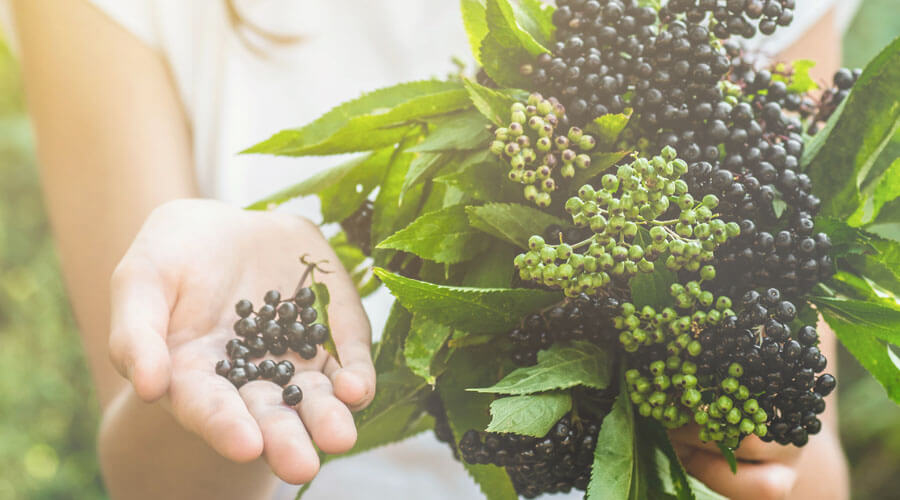 Black elderberry (Sambucus nigra L.) is well known in the scientific community as a supportive natural agent that has exhibited antiviral properties in scientific research that may be effective against the common cold and flu.

Elderberries and their extracts have been used for centuries for a variety of ailments, as they were regarded as “one of nature’s greatest healing plants.” Today, elderberries are one of the most widely used medicinal plants worldwide, particularly for their ability to help stimulate the immune system and potentially reduce the duration and severity of the common cold and flu. These berries are rich sources of bioactive phenolic compounds, such as quercetin and anthocyanins, which have been shown to support antioxidant status in the body.*

In a recently published systematic review of five randomized controlled trials, researchers assessed the benefits and potential harms of elderberry supplementation for the prevention and treatment of viral respiratory infections, and its potential to overproduce pro-inflammatory cytokines that increase the risk of a cytokine storm.

However, the evidence demonstrated some beneficial effects on inflammatory markers, including significant reductions in serum C-reactive protein and interleukin-beta after 30 days of supplementation. Compared to a common NSAID, elderberry supplementation was as effective in cytokine reduction over time in a small study. Likewise, compared to prescription antiviral medicine, elderberry was associated with a lower risk of adverse events and complications.

The outcomes showed no evidence that it overstimulates the immune response and suggests that it may be a more natural option to support viral respiratory infection treatment. Larger and longer studies are needed to fully elucidate and determine the significance of the impact of elderberry on inflammation and cytokine storms, as the current evidence is limited.

A meta-analysis of randomized controlled trials published in 2019 showed that elderberry supplementation effectively reduced URTI symptom duration and severity in 180 patients at the onset of URTI symptoms when compared to the placebo group. Furthermore, flu vaccination status was unrelated to the overall effects of elderberry supplementation on symptoms, appearing equally as effective among both vaccinated and unvaccinated participants.

According to the researchers, there is a demand for natural alternative therapies for routine cases of the cold and flu. Elderberry extracts, such as those in liquid or lozenge delivery form, maybe potentially safe and effective as an option for the symptoms of occasional viral URTIs.